Night after night.
I’d watch him and remark,
“this is strictly none of my business
but are you aware those are blank dice?”

He regarded this and simply remarked,
“doesn’t change the game or the odds
that you are not
just another ugly American
addicted behind the wheel
looking for the action
the sure thing
the real deal
knowing you’d settle for;
the rind, the peel, the squeal.

He had been a “wannabe” so long
that the “never was” in him grew curious as
to whatever became of that tired old “has been.”

Wanna see where the “wannabe” lingered too long
getting around to informing his “never was” to look
up that tired old “has been” and have a little fun
with his ass.

Wanna know how the “wannabe” was elevated to
the status of a “has been” after being allowed to skip the
“never was” designation all together,
it happened on that night when the “never was” happen to run
into the “has been” and grabbed himself fistfuls of his lapels
and snarled, “who never was?”
He wasn’t quite finished yet, however and with their jaws inches apart
snapped, “Listen you, I was a nobody before you were even thinking,
“wannabe” and my “has been” will see your dick in the dirt.”

So what are the odds?
Maybe some night you’re down at the bar
and three of them stroll in on the
perfume of the moon.
The “wannabe” buying them all a round.
While the “never was” fishes those dice out of his pocket.
But it’s the “has been” who is holding court with the
bartender and if you lean in a little closer you can hear
him saying, “Of course the dice are blank, what did you
expect, there’s a very good reason they call them “bones”
You be better off watching where you step either on the way up or
down because you never know who might have heard those
footsteps. Yeah, footsteps, they echo you know. It’s like this;
If you can remember where when, you can remember how now.” 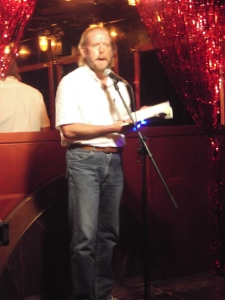 There he is again.
Just sitting there
Looking like
Busted-in “Lite-Brite”
Puss in squid
On early release
promising to break out
the O most holy id.

So when he started talking in punch lines
Down at the bar one night
Nary an eyebrow was raised.

How many will it take him tonight?
Five.
One to steer.
One to work the pedals.
Two to push and one to sit under the hood and go, “varooomm, varooomm.”
I won’t come in your mail.
Rentacunta.
Kunta Kinte
Lepra-coon.
It’s hard to tell.
They keep slipping down the drain.
Six.
One to change the light bulb
And five to write the environmental report.
A Sipnic
A spigot.
Why? You want to know why?
Because they’d honk the horn, squeal the tires
and play the radio too loud all the way to the moon.
Dago forward.
Dago backward.
And when Dago flat
Dago Wop! Wop! Wop!

No doubt about that and the buttered popcorn wasn’t bad either.
The difference?
Well…one you shuck between fits and the other you…
Tippy.
Barry.
Curly.
Seymour.
Pete.
Muffy.
Patience.
Sandy.

“O yes you can” said the farmer
“You just can’t understand him…
He said there are more fuckin geese than
You can shake a stick at!”
“I don’t know”
Said the parrot
“I got a hard-on and fell off my perch”

I know what your thinking right about now.
Where’s the poetry in half a joke?
Why does this revelation have to be like discovering
carpet tacks stuck in the finger holes of bowling balls.
You want to roll with this but
But really what are you left with?
The carpet tacks?
The punch lines?
The poetry?

Is this what your really left with…the short end
of a sharp shitty stick poked at you
from an ordinary everyday
little prick.
And O yes and don’t forget
the O most holy id.

If you ever really
knew the entire routine
would you feel better?

The newlyweds stopped at a Bed and Breakfast
for a room for the night.
At noon the next day, they still hadn’t gotten up yet so the
Landlady calls up the room to announce last call for breakfast.
“Don’t worry about us,” yelled down the groom, “we’re living on
the fruits of love.”
“FINE!” screams the farmer, “but quit throwing the dammed skins out the window
-They’re choking the ducks.”

(Swoboda was an out fielder for the NY Mets in the 60s. He made the catch in the 1969 WS. The quote attributed to him was- why am I putting some much effort into such a mediocre career)

Listen don’t get involved with any
of this poetry business if you think
You want money, recognition,
or encouragement.
You would be better off doing
something useful or profitable.
A plumber, for instance.
That’s right.
Hell yes.
Don’t laugh.
Nobody laughs at plumbers.
Too expensive.
However poets?
Har-dee-har-har.

Almost ALL poets
(even the big ones,
in fact especially the really good ones)
lived fairly miserable lives
and rarely were successful in their own lifetime.
The rest have their collected poems end up in
the landfill library after their death.

What are you
fucking nuts?

Can you really tell people with a straight face;
“I’m a poet”
Personally whenever on the rare occasional that
I’m introduced to somebody as a “poet”
I’m always fairly certain they heard “asshole” instead.

Poet’s big week:
The reading at the local community college with six people in the audience.
The woman in the aisle at the market who wants some of your poems for her daughter.
The high school class you conducted the workshop on great American mediocre poets.
The phone call from a local celebrity offering a paying gig five years too late.
Local newspaper prints one of your poems, (with all the typos intact) reviving
discussion in community that you’re a moron.

And still you refuse to give up
or in
and the past week’s events actually encouraged you?
To go forward with:
the plans for a second self-published book
to follow up on the wild indifference that greeted the first one.
To go forward with a CD compilation of the past 15 years of
generally ignored recorded poems.

This fabulous obscurity
that’s taken a lifetime to achieve.
I’d be more disappointed
if I had ever really worked
at any of it.

The Alcoholic Adjunct of the Month Club

That fall they had asked dad what he’d been up to?

“Purchasing major appliances and flying off at the handle.”
came the reply.

“Why is it that talking with you is like dropping a jar
of mayonnaise on a shag carpet?”

In the mean time
run his tags
test his urine.
Recite that alphabet
backwards.
No Jake Brakes
for Dad.

He’s not fooling anybody tonight
down the end of the bar as usual
with his 5 dollar and eighty cent
royalty check wrapped around the lamppost.

Dad hustled
and I mean hustled
man,
to make it right.

Cool Thursday evening
around quarter to seven.
Just after the 4th of July.

A work crew in orange tee shirts
line the bar for after work beers.

Blacktop I think. (from the looks of them)

The round went like this:
That’s 3 Buds, a Labatts Light, and Michelob.

But c’mon they are after all pretty beat.
You ever try spreading that stuff on your
feet for an eleven-hour day?

Yeah. No surprise here.
5 sweaty men with 5 sweaty beers.
Speaking low to each other, hunched over
butts and ashtrays.
They look as depressed, ornery and exhausted
as they have a right to be.

After all
Guess what they all get to do tomorrow?

At one point
Foreman announces,
“Let’s go and get some chow”
and in response more than half the crew
drinks them off
leaves the bar
leaving only two guys behind.

They decide to have “one” more.

Every crew has its’ “hard core.”

Would Hank have to explain it to you?

Man…..
would he ever look at you right now
and say, “You my friend…
You are out of place, time, and luck.”

Your old stomping grounds
look like the Monday morning after
the Circus elephants broke camp
at the carnival’s trailer park.

Better, face it kid
They don’t hand out Bukowski breaks
on street corners and if you don’t get
that through that thick skull of yours soon
your finished.

You never had his guts, endurance, or talent.
You’re at least as ugly
as he was
little debate there.
Sure you drink beer too…s’ what?
But whatcha expect anyway?
A thousand loser poets used his
smelly old fat ass as some sort
of measuring stick.

Believe this; your better off
trying to keep
your wife and kids
close to you.

Especially at the end.
The end always being a little nearer than you might think.
The finish always softens everyone up.

No. Buk would only look
at you and sadly, slowly
shake his head saying,
“sure you can buy the beer,
just don’t try reading
any of those horseshit poems
of yours, OK?

Is that strange verbal lurching
dance you schlep across the
vowelscape of the phonic bible
romper room really all that
important?

How about just for tonight:
You keep your piss and vinegar
Your sentimental bullying
Your paper wasp microphone
Your information age road rage

How about just for tonight:
You stand with me in the marketplace
You try to see what it is I see
O C’mon it’ll be fun……!!!!!!!!

We can blindly stare at anyone
who is not readily recognizable
codifiable, simplistic, one dimensional
cardboard cut out of derivative contrived
popular culture based reality and point fingers!!!!

Then we blend back into the shuffling trace of the mob
where the drooling innuendo laced drivel of
PRIME TIME media indices cow eyed moronic
compliancy and consumption.

Hey look lets face it.
Some of you out there haven’t had an original thought
in your head since before Kramer was considered clever.
O did I hurt your feelings?
Good. Now you know I feel.

Just for tonight:
Suspend belief
Entertain the notion that this
debilitating diatribe is essential to your
understanding of operation of the
brutal vending machine
they have made of the earth and
why on certain nights I feel like
the devil’s playground located in
the center of a third rate small time circus.
Wherein all the rusted battered amusement
park rides are constructed by shaky and suspect
picture sentences composed by blind drunk
carnies at five in the morning.

And you can guess whose got a pocket of
free passes with your name on them?

Once I did try this new place.
It was upscale and snooty.
They had a dress code.
The doorman eye balled me with disapproval.
“Hey” he said, “You need a tie to get into this place.”
So I turned on my heel, went back to car
and got a pair of jumper cables. Fashioned them into
a Windsor knot around my neck.
Marched right back that bar and presented myself
to the bouncer.
He regarded me for full thirty seconds.
Finally he let out a sigh and with a resigned air
hissed, “all right smart ass, go ahead in….
but….”. he grabbed me by the arm and warned
…..just don’t start anything.”

All selections taken from Attitude House 2000